Has Malware Made a Home in Your Router? 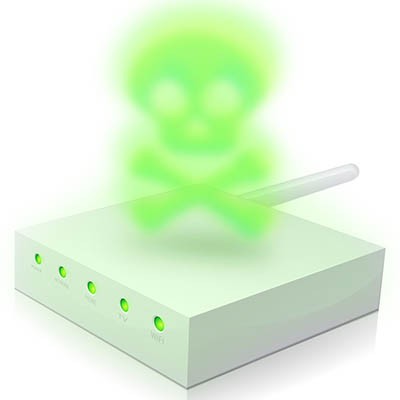 Hackers and cybercriminals, like most people, tend to gravitate towards high-reward activities. In this case, that means that focus is turning to creating malware that attacks the router, potentially infecting the users that leverage it to connect wirelessly to the Internet. Researchers at Kaspersky Lab recently discovered an example of such a malware, so today, we will review this threat and how to best protect your network.

Slingshot
This threat, codenamed Slingshot, targets MikroTik routers and utilizes a multi-layer attack to spy on the PCs connected to the router. By replacing a library file with a malicious alternative that subsequently downloads other pieces of the malware, Slingshot is able to bypass security solutions unscathed. It then launches a two-pronged attack, one leveraging low-level kernel code to give an intruder carte blanche access to a system, the second managing the file system and preserving the malware - allowing it to continue.

If this sounds impressive, it is - not only does this attack access additional code from an encrypted virtual file system, it does so without crashing its host. This quality and complexity led the security experts at Kaspersky Lab to conclude that this attack was state-sponsored. Based on reports, this malware can collect just about any data that it wants to from its target, from keystrokes to passwords to screenshots to network traffic.

According to MicroTik, their routing firmware has received a patch for this vulnerability, but it is still unknown if routers from other manufacturers are affected. If they have, Slingshot could suddenly become a much larger issue than it already is.

Other Router Malware
Of course, Slingshot isn’t the only issue that affects router security. The fail-safes and security measures baked into routers have been historically unreliable. This can largely be attributed to manufacturers building numerous products with no comprehensive strategy concerning their security and keeping it up-to-date. However, this doesn’t mean that the user is off the hook, either. It is up to them to actually update the router’s firmware, not something that is necessarily their first, second, or even twenty-third thought. Furthermore, the updating process can often be challenging, as well as time-consuming.

Hackers will often change the DNS server setting on a router in order to attack a network. Rather than directing you to the secure website you are trying to navigate to, the altered DNS will instead send you to a phishing site. Since these sites are often convincingly created and designed to fool their targets, you may not realize you are being victimized until it has already happened.

In addition to attacks like these, hackers will also often use methods like barraging their targets with ads or infiltrating them via drive-by download. Some attacks leverage cross-site request forgery, where a hacker will develop a rogue piece of JavaScript that will attempt to load a router’s web-admin page to alter the router’s settings.

How to Mitigate Damage to You
If you suspect that you are the target of a router-based attack, your first step should be to confirm that something is wrong. While there are assorted ways to accomplish this, the most effective is to check if your DNS server has been changed. To check, you’ll need to access your router’s web-based setup page, and from there, the Internet connection screen. If your DNS setting is ‘automatic,’ you should be okay. However, if it says “manual,” with custom DNS servers entered, you may have a problem.

In order to mitigate damage in the case of compromise, you’ll need to make sure that your router matches the specifications set by the manufacturer. To do this, make sure you:

If you want to know more about your cybersecurity, the professionals at BlackCSI are there here to help you keep your network and infrastructure safe. Call us at (717) 620-3042.

Facebook Twitter LinkedIn
Tags:
Malware Router Wireless Internet
All Work and No Play Makes Fewer Opportunities
Tip of the Week: PowerPointing You In the Right Di...